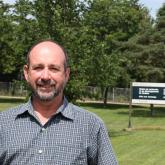 Stéphane Gariépy is an agricultural engineer who graduated from Laval University (1985) and holds a master’s degree from the Quebec National Institute for Scientific Research (INRS - Eau, 1987). He is currently a Technical Manager in the Agriculture and Agri-Food Canada (AAFC) Science and Technology Branch in Quebec City.

Stéphane began his career at the Quebec Department of Environment, where he worked from 1988 to 2005 in research and development funding, treatment and use of livestock effluent, and integrated water management using a participatory approach to watersheds.

Stéphane joined AAFC in 2005. From 2005 to 2012, he worked to support and structure the development of agroforestry in Quebec. Along with various collaborators, he set up the CRAAQ (Quebec Reference Center for Agriculture and Agri-food) Agroforestry Committee and participated in several projects related to agroforestry, including studies on ecological goods and services, the production of tools for practitioners and the implementation of various experimental and demonstration systems, including intercropping systems and multipurpose riparian buffers, particularly in Montérégie, south of Lac St-Pierre.

In 2012, as Acting Director of the Knowledge and Technology Transfer Office, he led the development of AAFC’s transfer strategy for Quebec. Since 2013, he has been working with various collaborators on collaborative approaches to promote the transfer of knowledge and technology from AAFC. At the same time, he has undertaken to develop collaborations with various partners to carry out projects that support the agricultural and agri-food development of Aboriginal communities.

Called by the environmental, agro-economic and social issues of rural and agricultural communities, Stéphane has worked throughout his career to bring people and organizations together around new approaches, including integrated water management, agroforestry, open innovation and, more recently, the advancement of Aboriginal agriculture and agri-food, which he considers his final major professional challenge as a federal public servant.