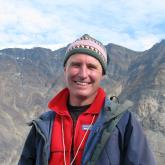 I have led numerous geological mapping projects in remote parts of the world, from the Coppermine River area in the NWT (where my colleagues and I discovered the oldest rocks in the world) to Banks Island, the Keewatin, northern Quebec (where we discovered and mapped the world's most extensive Paleoproterozoic ophiolite), southern, southwestern, southeastern, south-central, central and northern Baffin Island, western Greenland, Scotland, Greece, the Himalaya of Pakistan, India and Nepal and the Tibetan Plateau in China. I was appointed Senior Research Fellow at the University of Oxford in 2004, Fellow of the Royal Canadian Geographical Society in 2010, Senior Scholar at Cambridge University in 2019, and Visiting Professor at Oxford in 2019.  My innovative work led to the publication of the “Geological Map of the Arctic” in 2011, the “Tectonic Map of Arctic Canada” in 2015, the GSC’s first-ever geological maps in Inuktitut, also in 2015 and the "Tectonic Map of the Arctic" in 2019.  Presently I am co-lead on the Canada-3D project, which among other objectives aims to produce an updated, digital, 3-D "Geological Map of Canada", and North American contributor to a 2022 "World Map of Orogens" as part of IGCP project 667.