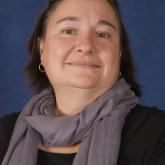 Dr. Carisse works as plant pathologist with Agriculture and AgriFood Canada since 1992. She is a plant pathologist and a world expert in molecular aerobiology, crop disease management and theoretical crop disease modeling. During the last decade, Dr. Carisse’ research has taken a path of increasing specialization and of integration of various disciplines namely aerobiology, epidemiology, mathematical modeling, decision/sampling theory and molecular quantification of pathogens inoculum and resistance to fungicides. The resulting knowledge landscape is a powerful driver for solving crop disease problems and for adoptions by stakeholders. She is working with the industry to implement networks of airborne pathogens and fungicide resistance monitoring and improved disease management decision systems. She was awarded by the Canadian Society of Plant Pathology Outstanding Research Award (2015) and elected foreign correspondent of the French Academy of Agriculture. Dr Carisse is spokesperson for the Biovigilance research platform. This platform aim at promoting research on temporal and spatial evolution of plant pests as influenced by agricultural systems, protection products, cultivars, farming practices, and climate change.

1. Molecular aerobiology. Dr Carisse leads one the rare program in the world on quantitative molecular aerobiology. Dr Carisse research in aerobiology is distinctive because for the first time it is possible to quantify precisely airborne inoculum and to use this information for plant disease management. Detection and quantification of airborne spores contribute to fungal diseases prediction however; monitoring airborne inoculum requires that spore counts are done accurately and in a timely fashion. Dr Carisse developed a DNA-based method for quantifying airborne inoculum of Botrytis squamosa, a damaging pathogen of onion. Receiver Operating Characteristic (ROC) curve analysis was used to compare the DNA-based method with conventional microscope counts. The proportion of good decisions was higher with the qPCR assay than with the microscope counts. These results demonstrated that this new qPCR assay was reliable to quantify B. squamosa airborne inoculum in commercial onion fields and that molecular conidia quantification could be used as a component of a risk management system for Botrytis leaf blight. Based on Dr Carisse’s work on molecular aerobiology, two networks of airborne inoculum monitoring were implemented, in 2008 in Quebec for management of Botrytis Leaf Blight of onion and in 2011 in New Brunswick for Late Blight of potato management.

2. Quantitative analysis of incidence and distribution of nucleotide polymorphisms (SNPs) related to fungicide resistance. In modern agriculture, fungicides play a major role in integrated disease management; however, the presence of resistance has become an important factor in limiting their efficacy. Despite the economic and agronomic importance of fungicide resistance, its detection is tedious and time consuming. Dr Carisse developed assays based on PCR-RFLP, AS-PCR and RT-qPCR to detect the presence of 9 SNPs related to resistance to iprodione, boscalid, azoxystrobin and fenhexamid in Botrytis cinerea populations. Using these tools and spatial point patterns analysis, she was able to demonstrate that three spatial relationships can arise when spatial point patterns representing the presence of SNPs related to fungicide resistance are compared by pairs: spatial exclusiveness, spatial inclusiveness and absence of a spatial relationship. These results are supportive of models of co-existence between sensitive and resistant strains, and showed that heterogeneity in population genotypes can slow down resistance development. In addition, based on geostatistical and distributional approaches, she showed that the SNP are spatially aggregated and developed sampling curves for various levels of reliability. These results clearly showed that most commonly used sampling schemes for fungicide resistance are inadequate for moderate or low incidences. This work represents the first attempts to study the spatial distribution of resistance at the molecular level and has great potential for building resistance management programs.

3. Quantitative epidemiology and plant disease management. Dr Carisse’s research in epidemiology focuses on understanding and describing plant diseases using mathematics and statistics. Dr Carisse uses novel methods of analysis to understand how environment influences diseases and to developed management strategies.  For example, she used survival analysis to identify factors associated with grape leaf defoliation caused by Elsinoe ampelina, the anthracnose pathogen. Based on accelerated time failure modeling, she could identify the most significant variables related to defoliation and suggest anthracnose management strategies. She was one of the first epidemiologists to use kernel regression to analyse the effect of leaf and berry maturity on powdery mildew. Similarly, she used polynomial distributed lag regression models to investigate the association between foliar strawberry mildew severity, Podosphaera aphanis airborne inoculum concentration, weather and subsequent crop losses for day-neutral strawberries. The model built using percent leaf area diseased with a time lag of 8 days and a polynomial degree of 2 provided a good description of the crop-loss data. The forecast models developed based on these studies are used by growers and crop consultants to make management decisions all across Canada and elsewhere.

She was invited to prepare a book chapter: Carisse, O. 2014. Epidemiology and aerobiology of Botrytis spp. in Botrytis – the fungus, the pathogen and its management in agricultural systems. Eds: Sabine Fillinger, Yigal Elad & Mélané Vivier. Kluwer Academic Publishers, Springer, the Netherlands.

4. Plant disease risk assessment tools (decision theory). Every day, growers must make decision regarding plant disease management including fungicide applications. However, environmental considerations are becoming increasingly important and, as a consequence, it is less acceptable to apply fungicides needlessly.  Grower’s decisions regarding disease management are generally based on risk estimated from the value of the crop, the type of disease and its potential to cause losses, and on the cost of control measures. Dr Carisse worked on various risk estimation methods including Receiver Operating Characteristic (ROC) curve and Bayesian analysis. This approach facilitated the adoption by growers and advisors of several forecast systems while saving a great amount of time and money as compare to conventional evaluations.

5. Spatial pattern analysis and sampling. Dr Carisse’s program on spatial pattern analysis bridges concepts in botanical epidemiology and plant disease management. The goal of spatial pattern analysis is to gain an understanding of how diseases move within fields and ultimately design sampling strategies. Spatial analysis was used successfully to design sequential sampling for classification procedures (SSCP), using the Wald’s sequential probability ratio test (SPRT) for classifying apple orchards as above or below the action threshold for apple scab management. The new SSCP procedure allowed a reduction of fungicide usage during the summer of 30% and is now used by apple growers and advisors all across Canada. This basic work has increased our understanding of how fungal spores move within fields and lead to the development of sampling schemes for economically important airborne diseases such as potato late blight grey mold, onion blight and powdery mildews.