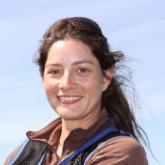 We have several ongoing research projects in Lake Winnipeg including a large-scale fish tagging project to study habitat use and movement of several fish species (Bigmouth Buffalo, Burbot, Channel Catfish, Common Carp, Freshwater Drum, Lake Sturgeon, Walleye) in the basin comprising the Red, Assiniboine and Winnipeg rivers, a juvenile fish survey in the literal and pelagic zone as well as a bathymetry and habitat survey.

Several of our projects are focussing on Species at Risk in particular on Rocky Mountain Sculpin, Western Silvery Minnow, Plains Sucker, Athabasca Rainbow Trout, Westslope Cutthroat Trout, and Carmine Shiner. We are also interested in the impact of Aquatic Invasive Species on the ecosystem and are working on a collaborative study with Ducks Unlimited in Delta Marsh on Lake Manitoba in the frame of the Common Carp Exclusion project.

In regards to habitat assessment, we are developing a user-friendly modelling tool to automate production of bioenergetics based habitat suitability curves for instream flow assessments in a collaborative project with Jordan Rosenfeld and Brent Eaton from University of British Columbia.

My research areas include fish ecology, fish and habitat conservation and restoration, and environmental impact assessments of anthropogenic flow and climate changes on fish populations. I am particularly interested in issues regarding (1) the winter biology of freshwater fishes in respect to habitat use and availability, energetic costs of overwintering, survival, and activity patterns, (2) fish passage through fishways and culverts, and (3) the effects of turbulence on fish behaviour and energetics.

Fisheries Society of the British Isles