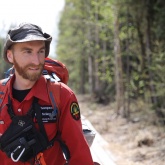 Dr. Dan Thompson has worked as a wildfire research scientist with the Canadian Forest Service since 2011, and as an Adjunct Professor at the University of Alberta’s Department of Renewable Resources since 2013.  His research is focused on boreal wildfire spread and impacts using an environmental physics framework.  He is a member of the Canadian Forest Service Fire Danger Rating Group, tasked with revising and updating Canada’s operational wildfire prediction models.

Dan is the Applications Lead for the WildFireSat mission, a Canadian wildfire monitoring satellite mission, set to launch in 2024-25.

His interest in the application of his research and wildfire science overall extends to his training and designation as a nationally-certified Fire Behaviour Analyst, where he provides numerical projections of fire behaviour and spread to Incident Management Teams from fire management agencies. Notable deployments include Fort McMurray 2016, Kamloops, British Columbia 2017, and Prince Albert National Park 2018.

I am a research scientist in the Canadian Forest Service, Natural Resources Canada, and specialize in the hydrology of disturbed landscapes, including fire and reclaimed oil sands mining sites.

Working on soil-vegetation-water relationships in upland reclamation environments with Brad Pinno at the CNRL Horizon site.

Adjunct Professor at the University of Alberta and Researcher in the Western Partnership for Wildland Fire Science.