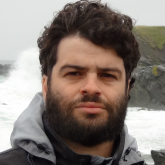 Alejandro Buren joined the Department of Fisheries and Oceans in 2013, as an Aquatic Sciences Biologist working on harp seals and cetaceans in the Newfoundland & Labrador Region.

Dr Buren has studied the role of marine top predators in waters off Patagonia, Argentina and off Newfoundland and Labrador. In Patagonia, he studied the effects of fisheries using a large skate as a biological indicator of changes in the community, and collaborated in projects devoted to the behavior and population dynamics of small cetaceans and sea lions. In Newfoundland, he investigated the relationship between prey availability and diet, using the common murre-capelin interaction as a case study, and assessed the hypothesis that harp seals are impeding the recovery of the northern cod stock. His current research is focused on the population dynamics, and foraging ecology of harp seals, and interactions between anthropogenic activities (fishing, oil industry) and pinnipeds and cetaceans in waters off Newfoundland and Labrador.