Investigating the cause of apple tree mortality in Canada 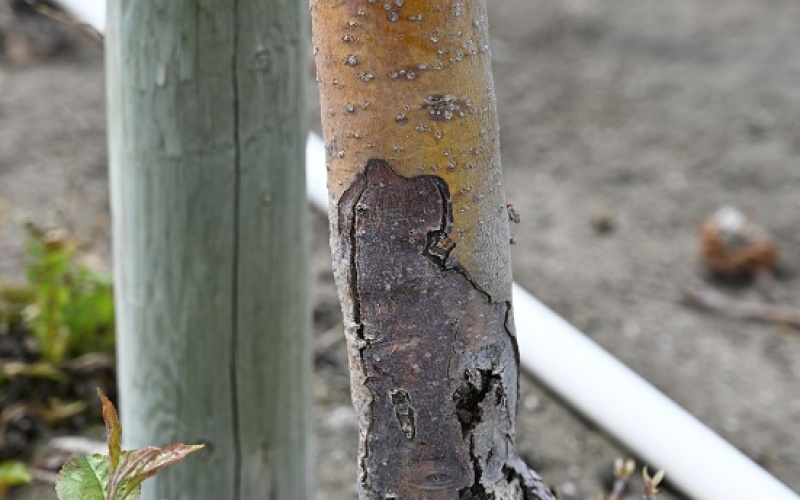 In 2018, growers started mentioning inexplicable die-back of a few apple trees here and there. Driving through the Okanagan Valley, British Columbia - a vast semi-arid landscape of acreages of apples, cherries, and grapes - it's not a surprise to see empty or weak patches of farms. This is agriculture - there's always some issue growers are facing. But as the season went on, and the province battled its second major wildfire year in a row, it became apparent that this wasn't your usual, sporadic horticultural problem. Trees were dying - by the thousands. Entire blocks were removed; some blocks looked so patchy that you couldn't tell whether there were more trees or empty spots. And what was even more surprising: it was affecting some of the best apple growers in the valley.

A small group of researchers, including the Summerland Research and Development Centre Plant Pathology team, took an interest early on due to a common symptom among affected trees. Almost all dead or dying trees exhibited a fungal infection causing a necrotic canker spreading up from the graft union (the bulbous junction between the scion and the rootstock of an apple tree). Dead trees appeared to have been completely overwhelmed by the aggressor, sometimes completely covered in small, pinhead sized, black welts called picnidia, each one safe-harbour for thousands of spores ready to burst out and spread to a new host.

Samples obtained from collaborating growers revealed a fungus - Cytospora sp. - to be the main fungal infection; however, the fungus isolated is only known to be an opportunistic species, affecting trees that are already heavily stressed, and does not typically cause death. So what has changed? What is the true stress causing this "Rapid Apple Decline" or "Sudden Apple Decline," as the phenomenon has come to be known in eastern North America where it's been studied to no conclusive answer since 2013.

The initial interest led to the development of a project spanning Agriculture and Agri-Food Canada researchers in all tree fruit growing regions of Canada, with collaborators in other government agencies, provincial governments, and experts from the United States. Dr. Oualid Ellouz and Dr. Jonathan Griffiths lead the project from Vineland Research and Development Centre, while in Summerland, the multi-disciplinary team investigating this has vast expertise is led by myself, and includes many labs: phytopathology (Dan O'Gorman & Dr. Jose Ramon Urbez Torres), virology (Dr. Helene Sanfacon), agri-environmental systems (Dr. Kirsten Hannam), plant physiology (Dr. Hao Xu), nematology (Dr. Tom Forge), and entomology (Dr. Gary Judd & Dr. Chandra Moffat). The project began in spring of 2019 and will run into 2022.